This locomotive was built in 1937 for the London Midland and Scottish railway company (LMS), as a Mixed Traffic Class 5 loco.
In the early days of the introduction of this class, it is understood that they were known as “Black Stanier’s”.
This being taken from the black livery which they all carried, later in time this “nickname”, somehow evolved and changed, to be known simply as “Black Five’s”
Thereafter within railway circles, they never seem to have lost this affectionate accolade.
With the Five coming from their power classification which was originally 5P5F.

Black Five’s were a robust mixed traffic design, being used to pull both passenger and freight trains, later their power classification changed to 5-MT reflecting their suitability for mixed traffic work.
They have been described, as a do-anything and go-anywhere type of loco, suitable for just about any type of work required by their home depot.
The building project originally commenced in 1934 with the
London Midland and Scottish Railway (LMS), when after the design’s initial batch were constructed and put to work, they were proving to be successful. The programme was therefore greatly expanded with 842 eventually being manufactured.

The last two examples were constructed some 17 years later in 1951 but with some radical changes to the design.
These changes included experimental equipment, such as Caprotti valve gear, Skefko roller bearings, with only two examples being fitted high running plates and double chimneys.

The manufacturing for this large class of loco being split between the LMS & British Railways @ Crewe, Derby, Horwich (Nr Bolton), combined with two independent engineering companies, The Vulcan Foundry (Newton-Le-Willows) and Armstrong Whitworth & Co (Newcastle-upon-Tyne).
Armstrong Whitworth was the company who built this loco and went on to eventually construct 327 examples.

As originally constructed in 1937 her 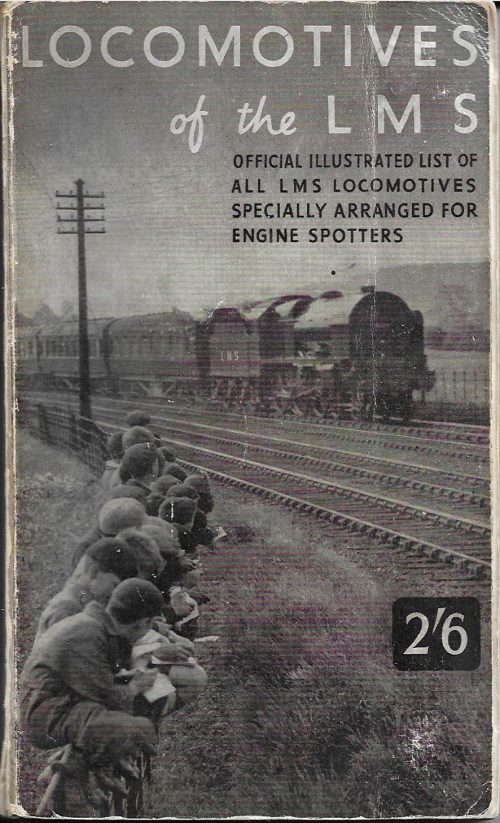 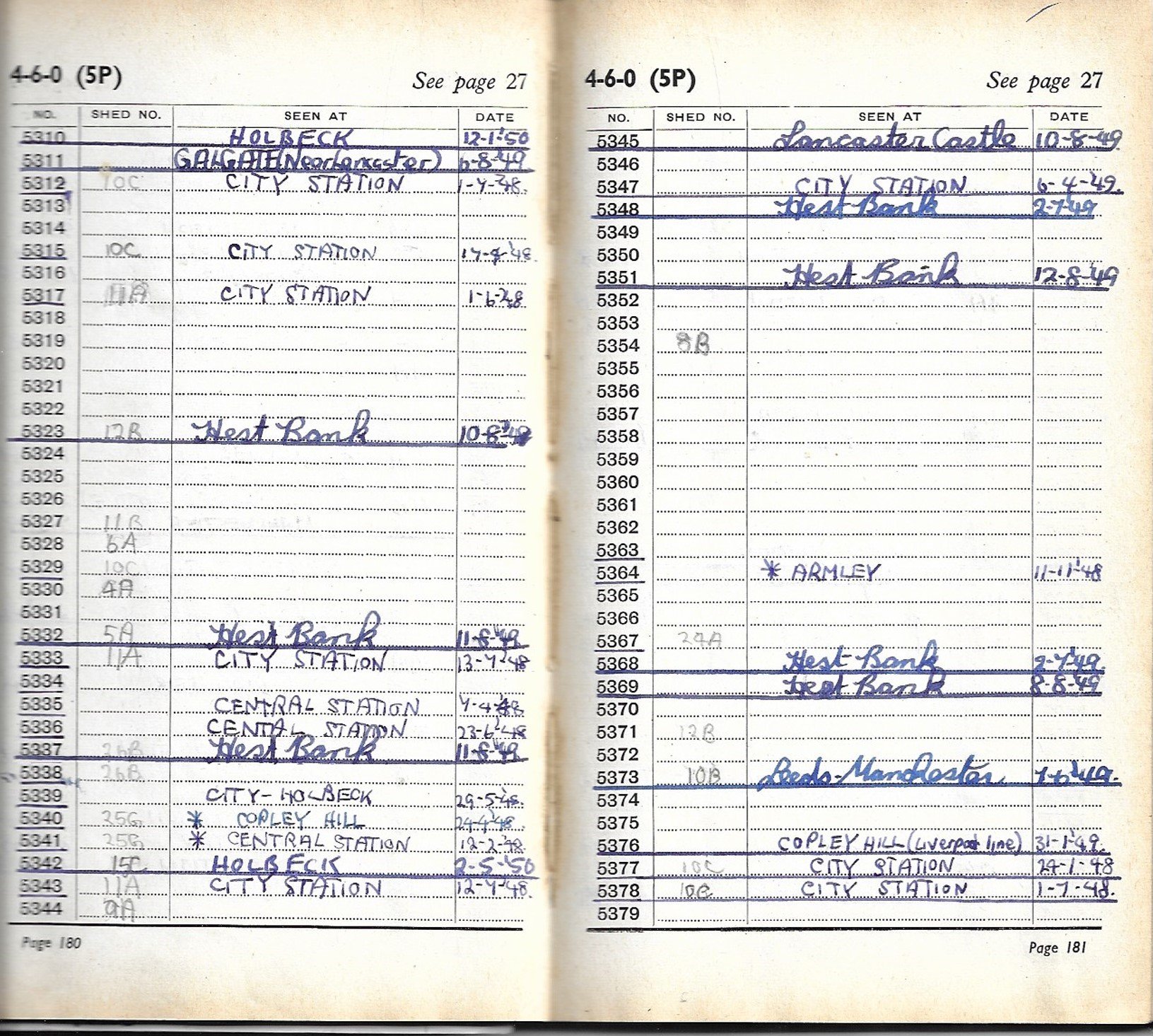 5337, for which she was allocated from 1937 up to the nationalisation of the railways in 1948.
Thereafter the LMS railway company was absorbed by Government nationalisation, becoming just one part of British Railways, generally known as the London Midland region.
To comply with the new British Railway renumbering scheme for this region, most London Midland locos had a number 4 added to the front number, subsequently the number became 45337.

From delivery, she was originally dispatched to the resort depot at Blackpool. However, within a few months she found herself working from the Manchester depot at Newton Heath.
Most of her working life being spent within Lancashire and around the north west of England.

Although like many locos, she was also maintained at other motive power depots as well, which amongst others included, Bank Hall (Liverpool), Low Moor (Bradford) together with the Lancashire coastal resort of Southport.
From 1947 maintenance was mainly being carried out by the motive power depot, just north of Manchester, known simply as Agecroft.
This depot had a shed location code known as 26B, as 45337 had spent around 16 years of her working life there, this shed code is now reflected in the name of the owning group.

Just as designed, she went on to provide a useful service with both the LMS and later British Railways, pulling both commuter and express passenger trains, together with freights, parcel services, and long rusty loads of coal wagons for some 28 years.
Not particularly glamorous work, no prestige express trains like the Royal Scot, or even a Royal train either, just the ordinary day to day activity of a mixed traffic loco, but none the less, important work for the time.

After years of providing this loyal service, the 1950’s saw the winds of change arriving with the modernisation plans of railways gathering pace, resulting in the introduction of new diesel and electric powered trains.
The Victorian ancestry of steam locomotives were now clearly beginning to wane, rapidly going out of favour, being replaced by Boxes on Wheels, which you just sit in, switch on and go.
Therefore, change was inevitable resulting in the withdrawals of Black five’s, together with the general elimination of all steam locomotives, in favour of their new modern adversaries.

Agecroft depot was an early casualty to these changes, for as steam locomotives rapidly disappeared from the railway network, the depot was now deemed surplus to requirements.
It was common practice for closing depots to have their remaining assets, which were still fit for service, such as machinery, locos and (some) staff etc., moved to other depots.
This process was driven by the economics of the time, in order to help alleviate difficulties other depots were having operating their own ageing fleet of steam locos etc.

45337 still being deemed fit for service was sent north to become part of the (Shed) allocation at Carlisle (Kingmoor).
Now being part of Carlisle’s allocation, there she continued to operate as normal.
Being still in control of various trains, taking them to Scotland, or on the West Coast main line, perhaps even to where she was originally constructed, back to Newcastle again.
But this work was short lived, for Carlisle turned out to be the locos final depot (shed), as within about three months of arriving there, during Feb 1965 it would appear a fault developed resulting in some repairs being required.
It is perhaps the case, that the work needed to return her to running order, was deemed uneconomical and not worth repairing.
Therefore, with little chance of the repairs being completed, most probably the shed foreman made the decision to shunt her into the withdrawal sidings, taking her out of service to await disposal.

She was an early casualty for Black Five withdrawals, as many of her class continued running right until the very end of main line steam on British Railways.
Very generally speaking and not exclusively, compared to many other steam locos Black Five’s had less complex maintenance requirements than others, being noted to be reasonably reliable.

The justification of this statement was the large number built and the number of them still rumbling on, pulling trains around the railway network, right up to the last year of standard gauge steam traction.

For another example, during August 1968 no less than three Black Five’s and a Britannia class 70013 Oliver Cromwell were used to pull British Rail’s very last main line steam train.
It is well known; this special train ran from Liverpool to Manchester then over the Settle Carlisle Railway, then eventually returning to Liverpool.

Within railway folklore, it is well known that this last steam train became known as, the fifteen Guinea Special, or even just its train reporting number being IT57.
With a little irony, after leaving Manchester IT57 passed the derelict site of the old maintenance dept of Agecroft, no doubt nobody on board gave this a second thought, having more important matters to think about, like-“what are we going to do with ourselves now there’s no more steam locos left”?

Being an early withdrawal casualty, photos of past workings on the main line are quite rare, 26B having been able to accumulate just a small number of photos, which are almost all plain black & white, with only one known colour photo thought to exist in BR service (at Southport).
None seem to exist of her whilst in her original

LMS livery.
The ultimate accolade would obviously be a colour photo of her in LMS livery, (the holy grail, so to speak) but this seems a very unlikely proposition.

If anyone possesses or knows of any such photos of her main line past, either in BR or one (or two) in LMS livery, then please let us know, we would apply accreditation and would appreciate the chance to expand the pre-preservation photo record.
Please feel free to leave a message on our contact page.

For the History of any British standard gauge steam loco please follow this link: www.preservedbritishsteamlocomotives.com