We believe this is a stunning painting and appears to be so much better in real life, than viewed on screen, we are very pleased to share this image with you and to offer prints for sale.

This commission was undertaken by renowned artist Rob Rowland, a member of the Guild of Railway Artists – Rob worked on the paintings design through 2018 and 2019. During this time aspects of the painting became a challenge to complete. The angle of perspective being from where there are no known photographs thought to exist. With his skills aspects of the scene came together as art and childhood memories.

We are pleased to be able, to now share this print with you.

The scene depicts a late summer evening scene in the early 1960’s, of Black Five 45337 slowly drifting past Bolton West Signal Box, and just about to enter Bolton Trinity Street Railway Station. The bridge is known locally as the Johnson Street footbridge and passes close to the signal box, providing a convenient way for passengers to walk from the Station into the Town Centre. Because of the footbridge’s proximity to the Signal Box windows, railway enthusiasts could listen with some curiosity to sounds of bells and mechanisms from within, the bridge itself often being a haven for the young train spotters of the day.

When observing aspects of this scene, the railway tracks curving to the right are for Blackburn and beyond, being part of the route taken in August 1968, by the last British Railways main line hauled steam train, memorably known as the Fifteen-Guinea special.

The tracks curving from the the left are from Wigan, Preston and the West Coast main line, with many passenger trains originating from Lancashire seaside resorts such as Southport, Blackpool and Morecambe. In addition, trains passing from this direction could have originated as far away as Aberdeen, passing via Bolton onward to Manchester.

The image of 45337 passing Bolton West signal box, is an assumed express train originating from Southport, the origin being selected because of the only known colour photo thought to exist of 45337 before preservation was at Southport. (This photo can be seen within the post preservation Gallery), you can also view within the Video Gallery “Five Fives at Southport” (for a few moments of this era), showing Black Five’s with Southport for Manchester trains in tow. There also appears to be a few seconds footage of 45337, possibly when she was allocated to the depot at Southport, although the video date (1967?) does not coincide with the withdrawal of the loco!

This painting depicts 45337 passing one of the new English electric Type 4 diesel locos, which will be becoming part of the future changing face of the modern railway system.  Within the triangle area in the background, what appears to be an ex-LMS Crab Loco can just be glimpsed standing stationary appearing in charge of a mineral train of coal wagons. This third loco helps to complete the “Bolton Trinity” painting, shown in conjunction with the three Signals and Chimneys within the scene.

We hope you enjoy viewing this painting, as all the proceeds from the prints requested will be used to help towards the costs involved in restoring and maintaining 45337.

The Black Five steam loco is shown slowly drifting past one of the new green order of diesels, which amongst others, are looking to take future rail operations away from traditional steam engines.

Undaunted by the diesel, 45337 is heading for Manchester in charge of an express from Southport passing the Bolton West signal box, this had one of the last remaining lower quadrant signals dating from the Lancashire & Yorkshire Railway era still in service.

Possibly because of its significance, 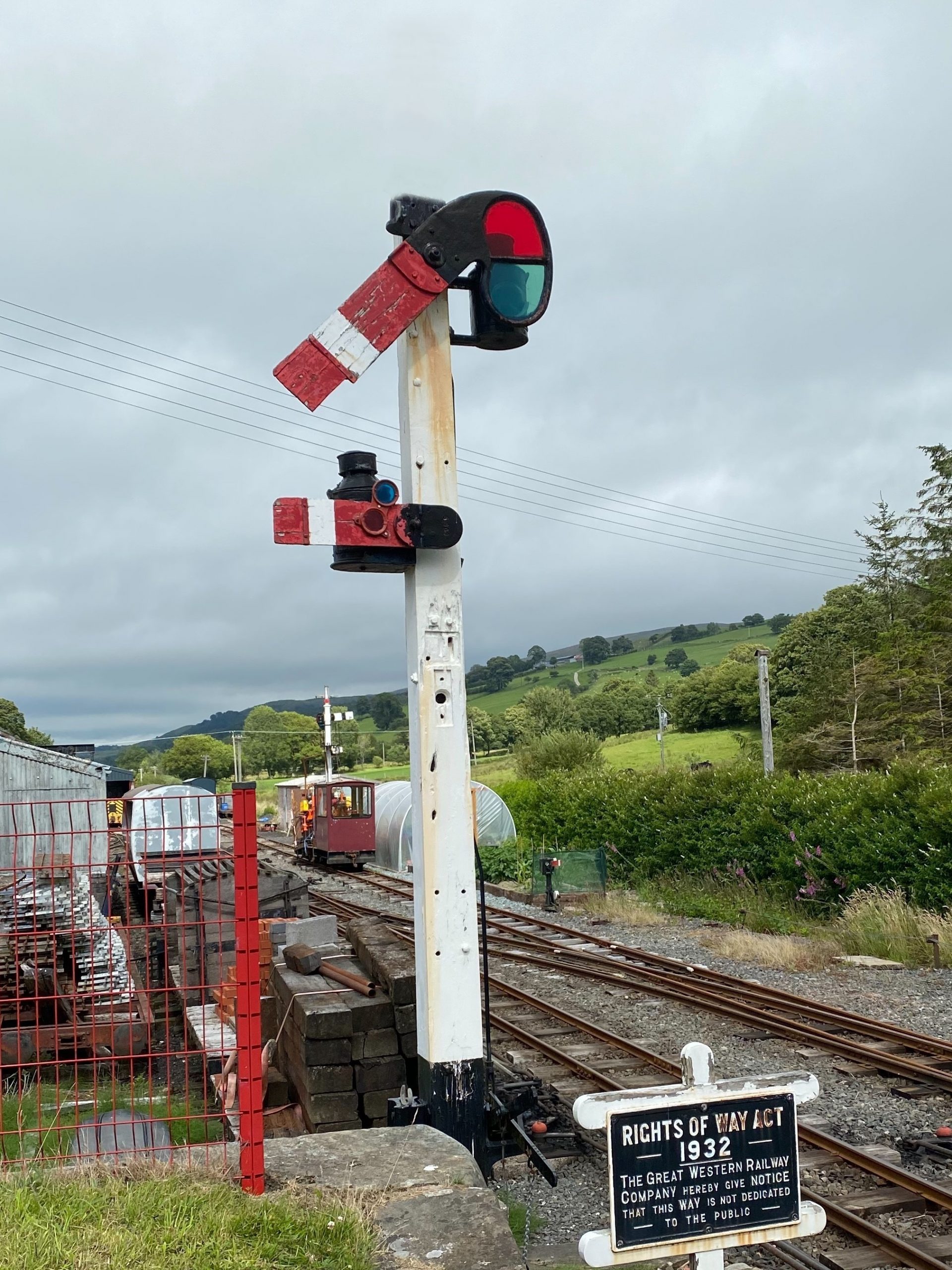 this signal still exists and was preserved, now safely protecting trains at a Station in North Wales on the “Bala Lake Railway”

Just like on countless other occasions, and being no stranger to Bolton 45337 is approaching “Trinity Street” station, which after travelling at express speeds, the driver has slowed down to not much more than a walking pace, because of the right curvature of the line ahead and having only limited views, the fireman leaning out of the cab will be calling out instructions to him, whilst keeping an eye on the track ahead, thus giving him the all clear to proceed.

The tight curvature causes the wheel flanges on the loco to squeal out in protest, whilst the safety valves are blowing out white steam and roaring noisily, doing what they were designed to do, releasing high pressure steam from the boiler, thus avoiding any chance of a disastrous explosion.

Meanwhile in the cab and in order to shut down those noisy safety valves, the fireman opening the injector controls would be moving cool water from the tender directly into the boiler thus topping it up and cooling the water already within, thereby slowing down the production of steam, while helping to stop the deafening roar of those safety valves.

After drifting to a halt at the end of the platform, the crew will no doubt have a few moments rest, for a quick chat, grabbing a swig of tea from the caddy. – whilst returning holiday makers, day trippers and commuters alike disembark the carriages,  Shortly after and with much banging and slamming of carriage doors, with a clear signal ahead, the train’s Guard whistles the all clear, with a returning hoot from 45337’s whistle, the train re-starts departing for Manchester.

The 1960’s “Changeover Years” from Steam to Diesel are emphasised by the nearly new English Electric Type 4 Diesel Loco, believed to be D233 being named” Empress of England”. Being held at the signals under the footbridge and making its presence felt with an acrid smell and blue tinge from its exhaust systems, together with a strange new relentless whistling sound from its mighty engine at idle.

The name “Empress of England” being taken from a ship, although this class of diesel numbered 200 only 25 originally carried names, all being derived from great Ocean Liners. Railway enthusiasts affectionately referred to these loco’s as “Whistlers”, later in their working life they were all renumbered and mainly referred to as simply “class 40’s”

As “Empress of England” was still quite new to the scene around Bolton, it appears to be causing some interest with the local railway workers being looked upon with some bemusement and fascination. This modern type of loco, new to the industrial North West, is depicted being in the process of moving light engine.

Meanwhile, in conjunction with the three signals and three factory chimneys, the painting’s “TRINITY” is completed by the glimpse of a third unidentified loco held stationary within the triangle fork of the footbridge.  This appears to be an ex LMS Hughes 2-6-0, known by nickname as a Crab loco, these were rugged useful loco’s of an older design than Black Five’s, also being of a mixed traffic origin, with smaller driving wheels they had a lower turn of speed, but well suited for pulling long heavy freight trains or still putting on some good shows with passenger work too.

This appears to be waiting patiently, with a train load of loco coal behind, which being around six miles further along the track, could possibly be destined for the Horwich locomotive works. No doubt the crew is taking a well-earned break, perhaps with a Woodbine and a cup of tea to hand.

The small image of the black cat within “Bolton Trinity”, seen near the signal box was found hidden as a starving kitten within the undergrowth, after noisily meowing and drawing attention to itself, the kitten was taken into the signal box by a local lady who worked as an employee within the station. At the time she was delivering food for the signalman, the kitten must have known or smelt hot food and continued to meow, one of the signalmen on duty that day shouted, “It’s a TINKER is that one”. Thereafter the name stuck, and “TINKER” eventually found love and happiness, when to the joy of her young daughter she was adopted and taken home, happily remaining with the same railway family for some 17 years.

Soon all the trains will move on and the railway workers will go about their own business, for a while silence will prevail, other than the distant chimes from the Town Hall clock, together with occasional sounds of bells and mechanisms from within the signal box, peace and quiet at the junction will resume once again.

This Painting is dedicated to the ongoing preservation of Black Five 45337 and of course, TINKER!

The “Empress of England”, Diesel was subsequently SCRAPPED! 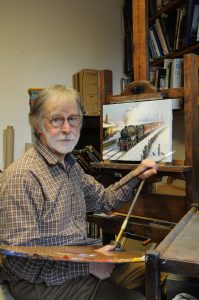