The first restoration began to take place at Bury with the overhaul slowly gathering momentum, eventually taking over ten years to complete. During this time the Loco and tender where both stripped down to the bare components and made good before being reassembled.

The restoration costs were rapidly increasing with the original budget being somewhat underestimated with further monies being sought from donors, shareholder funds, grants, gifts, selling model railways, rattling tin cans and perhaps the occasional begging letter.
We even had a collection box on the restoration site, made from an old fire extinguisher chained to the loco wheels, this had a slot at the top for coins to be inserted and a lock to provide some security.
Often visitors to the site used to slip some loose change into it, this never really amounted to an awful lot, but it did help to provide for consumables such as paint and brushes etc., with a fair amount of tea and biscuits too.
During this time all these monies where gratefully received, no matter how LARGE the donation.

One member of 26B started to investigate the possibility of obtaining a local authority grant but this proved unsuccessful. But being undismayed, learning from previous errors and refusing to cave in, he returned to the local authority with a cunning plan for a second attempt.
After informing them that up to now, the past funding for the restoration of this fine example of a North West steam locomotive had been entirely obtained by the exploits of the team at 26B, he went on to explain how this preserved steam loco (when running) could help the North Wests wider economy as a tourist attraction running on the East Lancashire Railway and by providing education as a museum on wheels.

The grant was subsequently approved, which helped tremendously arriving at a time when money was especially tight and provided a much-needed boost of morale to the team, also helping to enable the boiler to be finally completed.
The missing motion was either sort from other locos, or new ones were cast and machined.
But some turned up from people who had surreptitiously removed such items at Barry for mementos, upon learning of the restoration quietly came forward with their treasure.
A whistle was obtained from Ex-LMS Jubilee 45623 Palestine.

The original missing chimney even turned up one day after a phone call from someone, who was using it as a plant pot.
However, after the first restoration this chimney eventually cracked and proved difficult to repair, a replacement was found but that’s another story!
A new smokebox door was manufactured together with a great deal of copper tubing for the oilways.

In the meantime, the boiler was being refurbished at a firm in the North West called C H Thompson Ltd, who at the time were involved with steam boiler work renovation.
This proved to be a cost-effective alternative to other quotations obtained whilst steaming through the full ten-year boiler ticket without any major issues.
Cab controls were sought, a new dome made, buffers replaced, gallons of mandatory black paint purchased, new boiler cladding produced, the tender being completed, and after obtaining a “new shovel”, she was nearly ready.
Then on one memorable day during May 1995.

With emotions held back, combined with a great sense of achievement, the fire box once again possessed coal, someone threw some wood through the fire box door, oily rags placed on the shovel, a box of matches appeared and for the first time in 30 years the fire was re-lit.

It’s difficult to put to words the emotion of those moments, and what the people involved felt or what was going through their minds, for it was the culmination of ten years work or more, spent during days off, bank holidays or working most weekends.
The common goal being to see her first few gasps of breath again, all watching and waiting to see if it would happen and if the time had finally come.
For once again there was a 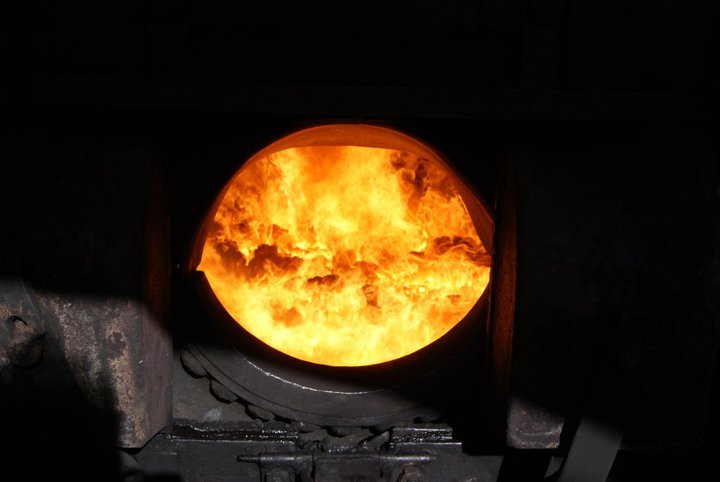 fire in her belly, pressure in the boiler, steam oozing from a few leaky glands, but had begun to steam, looking at those safety valves beginning to lift and hearing them roaring again was a sight to behold.

Once all the inevitable snags where attended to, usually with some big spanner or an even larger hammer, the regulator was gingerly opened, now being ready to start trundling up and down Baron Street yard making the first movements with her own power.
In 1995 the restoration was declared an overwhelming success being launched back into traffic, doing what she was designed to do, pulling passenger trains, (Tourism) putting smiles on people’s faces (Education).

During the next two years, she re-entered active service, working heritage trains on the ever expanding and developing East Lancashire Railway, with even the odd demonstration freight train thrown in for good measure as well.