After all the euphoria of the purchase going through
(and the cheque not bouncing), the problem the 26B team were now faced with, and had to resolve, was the tiny little thorny issue of removing her from the scrapyard.

For a moment please quietly think about this!

This is not like restoring an old motorbike or even some type of Classic car, like a Morris Minor or something.

There she was, standing there, in front of the fledgling 26B team, some of which only had sheer nervous energy, will and determination to succeed.
Weighing in about 72 tons of rusty metal, which quite frankly and 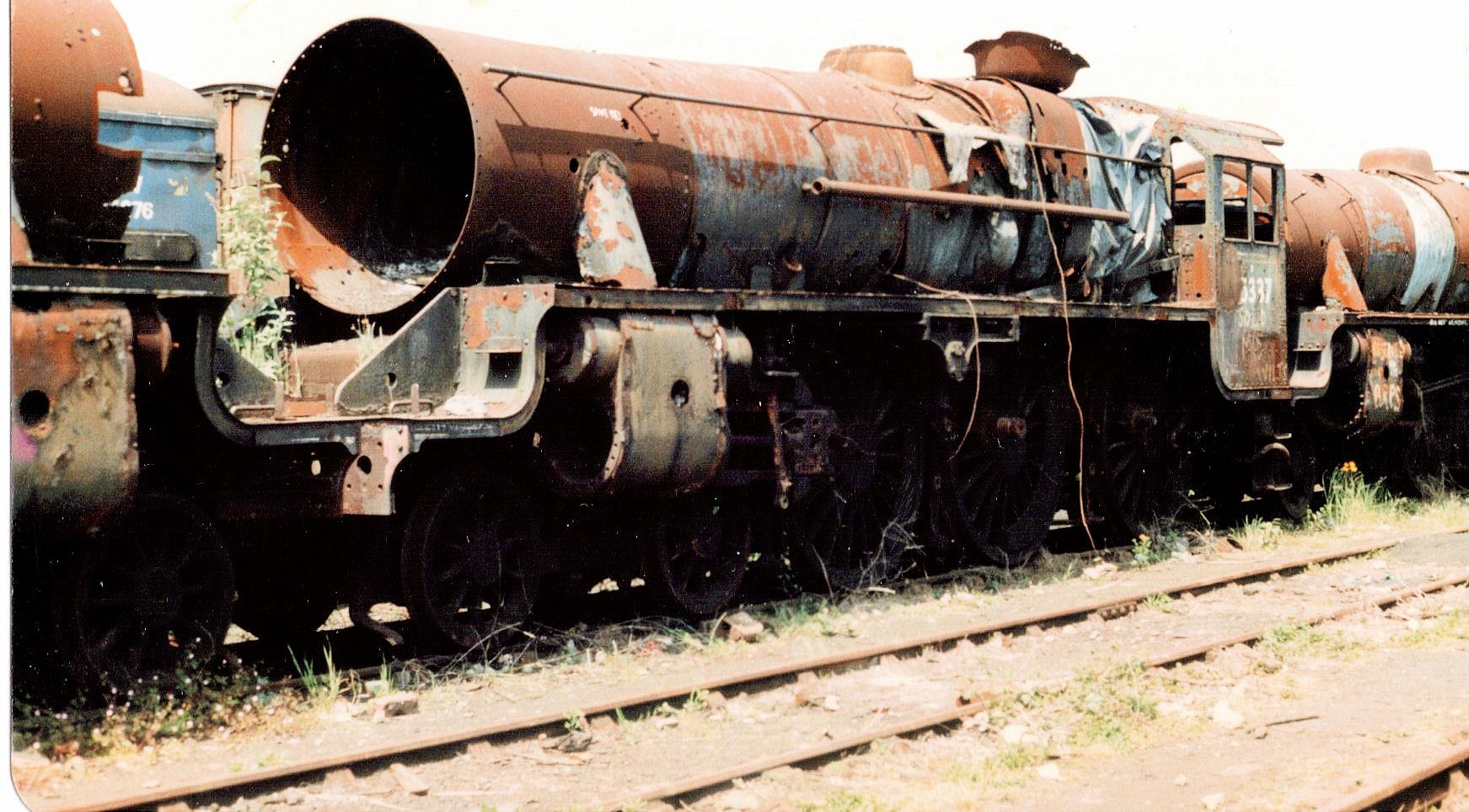 “being kind”, had seen better days.
In all probability she had not turned a wheel in years, with many parts seized up solid with rust.
If these problems were not enough, she was

positioned right at the end of a long line of other rusting steam loco hulks, who themselves were still waiting for other possible owners.
These were all shunted in behind her in similar states of disrepair, or even worse, all of which were blocking her exit from the yard.

The obvious answer was to whistle up a diesel shunter to do the job by moving all the other locos out of the way, this is so she could be moved out to the exit road, onto the back of a low loader for transporting out by road. In theory this was a good idea, until the logistics involved with a diesel shunter became apparent, together with a surprising estimate regarding the financial costs involved with this procedure.

After much scratching of heads, deliberation and no doubt a few more pints too, it was realised that these additional costs had either not been budgeted for or could be better deployed elsewhere. Therefore, an alternative solution was undoubtably required.

This is perhaps the time when the pioneering 26B team began to show resourcefulness, a trait which has been repeated time and again over several decades.

Frustratingly right beside the loco, tantalizingly, there was a completely clear stretch of railway track, which conveniently ran towards the exit of the yard providing for a quick escape.
But how do you move 72 tons of rusting hulk from one track on to another, Sideways?

A mobile crane was considerd but was out of the question both on the grounds of costs and access to the area concerned was too tight.
It was concluded that, if only she could somehow be moved over on to the adjacent track, within a tight budget, she would be in the clear to leave.

Therefore, a cunning plan was devised, resulting in a procedure being conceived, believed, to be a first at Barry.
It was concluded that a 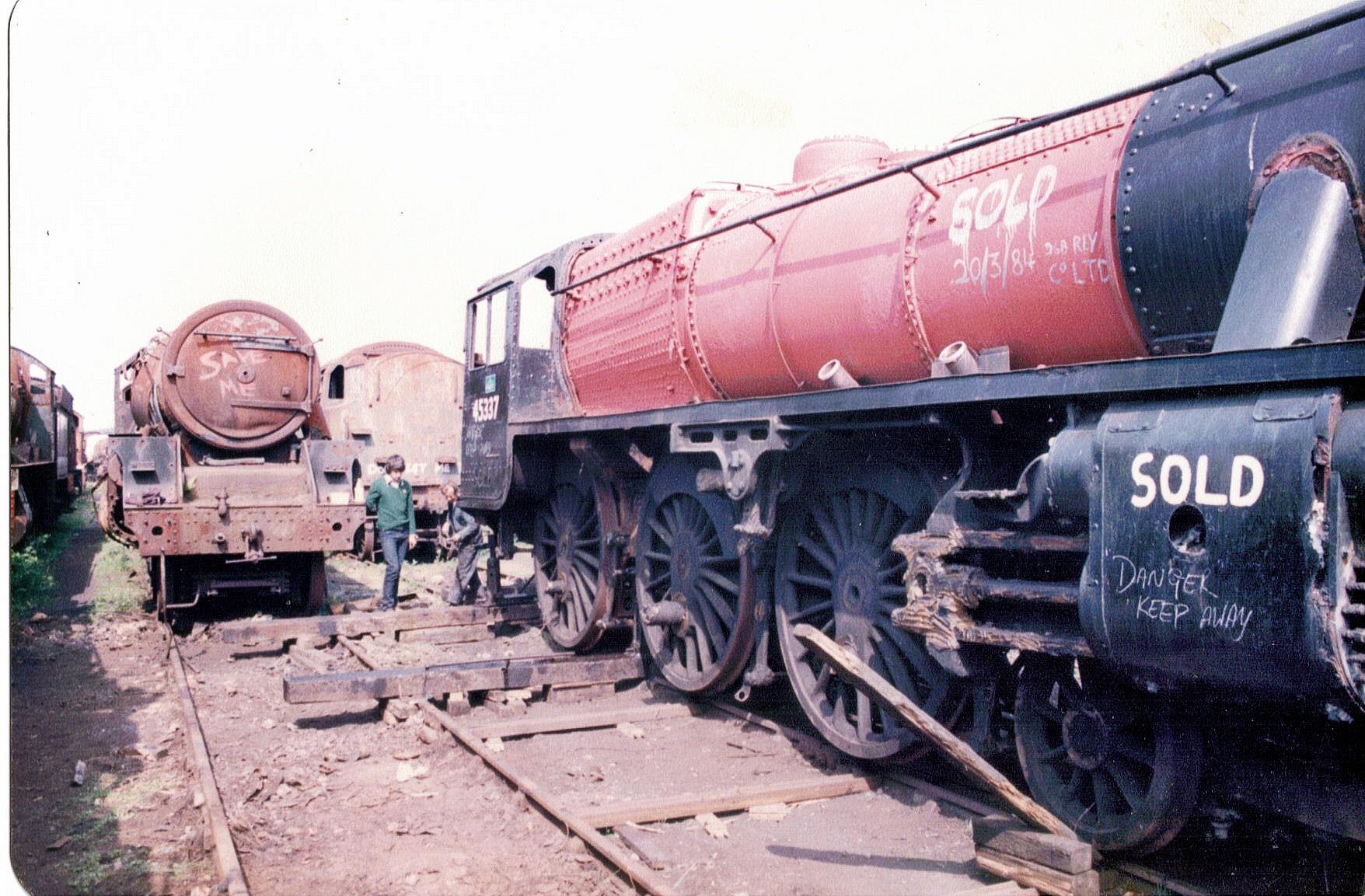 Sideways shunt of the whole loco was required, the goal being to move the loco sideways from the track she was 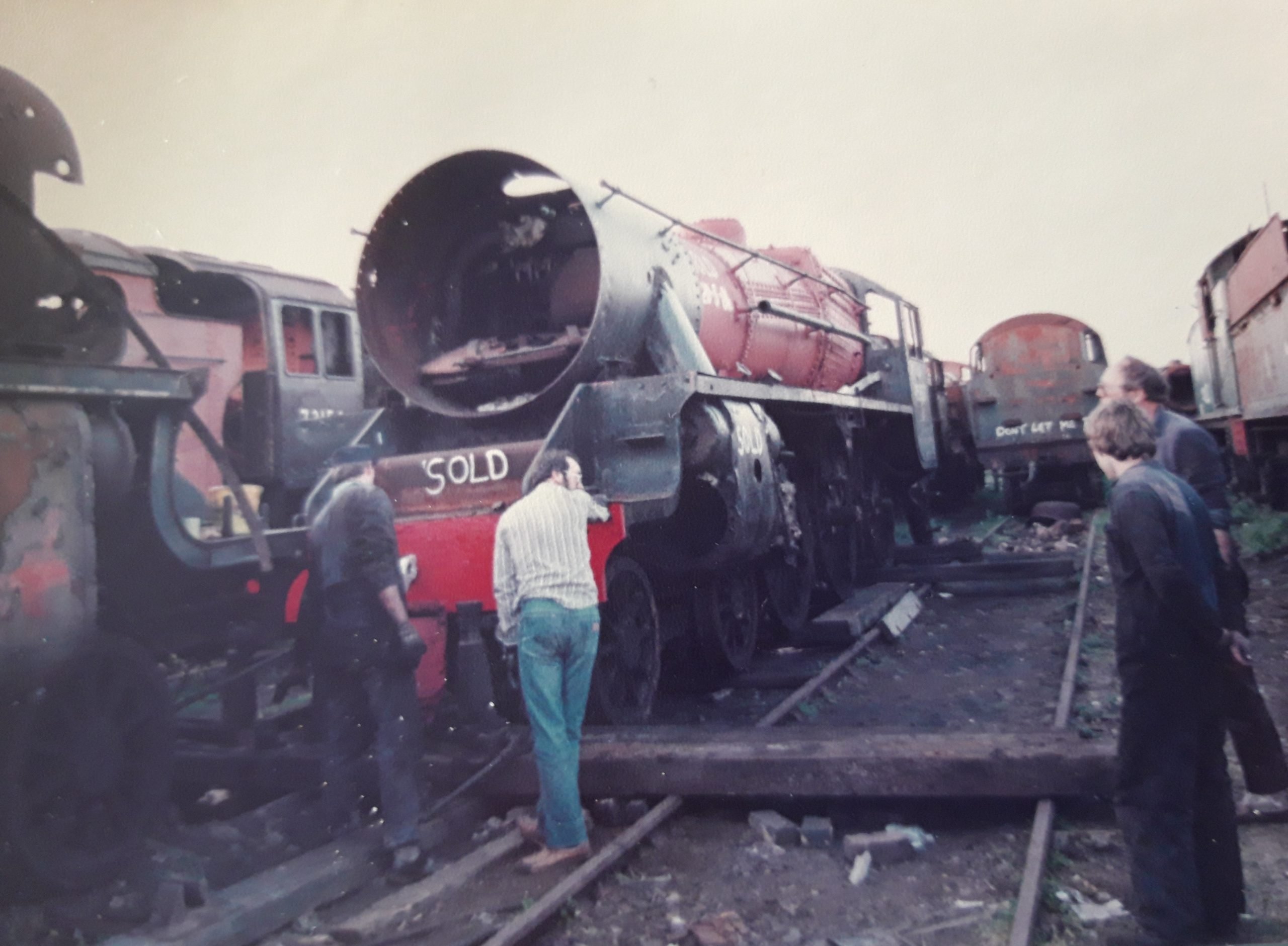 currently occupying to the one adjacent.
This track had no obstructions and provided her with a clear exit from the scrapyard.

A plan of action was devised, which involved using wooden sleepers, hydraulic traversing jacks, muscle power, a fair amount of courage, some colorful language, and lots of tea bags.
The loco was initially raised with the jacks, then traversed sideway and lowered back onto several sleepers, then repositioning the jacks. Each process moved the loco sideways a few inches at a time!

The whole procedure was both exhausting and time consuming, but none the less, she started to make her first movements, be it only inches at a time.
So, for the first time with 26B in charge she began a new journey, starting to move once again, although to be fair, this movement was actually sideways!

At the end of the first weekend, the team had moved her about halfway between the two tracks but had now run out of both energy and time.
Therefore, that weekends work was done.
After figuring out it was highly unlikely, that at any time soon another train was about to pass by on the adjacent track.
She was just left there in situ resting on the sleepers, sticking out and obstructing both tracks.
26B all headed home for much needed rest, no doubt with explanations to their loved ones where they had been all weekend and what they had been getting up to?
Undaunted, after returning the following weekend they continued the whole process again.
During the second weekend she had moved enough to be above the adjacent tracks, then lowered for one final time, with her wheels now once more firmly re-connected to the rails.

The exhausted team, no doubt feeling pleased with themselves, but must have been wondering, just what they had taken on with this task!

Fortunately, and for posterity one of the 26B team had in his position one of the early VHS Video cameras, which only recently had become available.
Thankfully he was able to capture these early days at Barry.
This camera was nothing like the type of camcorder or mobile phone you can easily purchase these-days, for example those who may remember the sketch from the “only fools & horses” television episode, where Del-boy had somehow acquired several huge Russian video cameras, which were so large, you had to rest them on your shoulders, you can imagine what this camera looked like!

But none the less, although it was big and heavy with a battery about the size of a microwave oven, it worked! 26B managed to record the sideway shunt and the loco extraction from Barry.
Over the proceeding 36 years the VHS video tape has understandably deteriorated somewhat and is no longer at its best.
For those who are interested, we are hoping to complete the editing of this soon, so we can share the footage for viewing within the Video gallery section of this website.